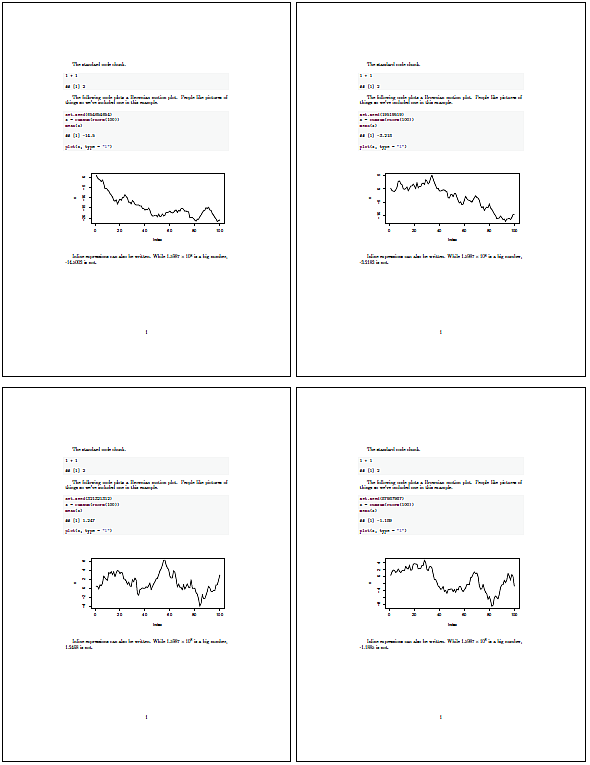 Of course Yi Hui’s knitr site gives you basically everything you need to get started. To setup knitr in R, install and load it as you would any other R package install.packages("knitr") and library("knitr").

To setup Emacs so that knitr can be used with ESS, follow the fine instructions provided by Simon Potter and the blog constantMindMapping.

The only real tip that I have to add is how to compile the *.Rnw file in Emacs. This can be done as shown on Simon Potter’s site by using the command M-n r followed by the command, as shown on Yi Hui’s github discussion, “knitr support in other editors (Emacs/ESS/Vim/Eclipse…),” M-n P. Note that this is a capital ‘P’.

The following documents were updated and compiled within seconds of each other! Given a more complicated set of statistical analyses this kind of work could have taken hours and resulted severe eyestrain or headache.

My friend Nichole has been doing her part to make statistics a family friendly activity.  She sells stuffed distributions, embroidered bibs, and printed shirts guaranteed to make your child more statsy (looking).  Right now she’s running a contest on her etsy site for a chance to win a smiling statistical distribution.

A Chi-Squared distribution to warm your hearts and minds.